Morpeth Town Councillor, David Clark, has refused to resign after making a number of Facebook comments that were reported into us by members of the public. Speaking to the Morpeth Herald yesterday, he stated:

“I abhor extremism of any kind and I was referring to extremists and not Islam as a whole.”

“This is my personal opinion and therefore it does not represent the views of any council I am a member of. I will not dignify the questioners with any further response.”

The problem with these responses is that an elected member is liable to be scrutinised for public and private comments they make particularly when those comments relate to issues that may be sensitive to local residents. In this instance, abusing the faith of some local residents, we believe, falls into this category.

The question has to be asked as to whether someone with views about Islam which Cllr Clark holds can honestly and objectively represent, advocate and act on behalf of local residents who happens to be Muslim and followers of Islam? This is the crux of the issue.

Furthermore, when you look at the Facebook statements made by Cllr Clark, they are directly against Islam and, it can be said, against the followers of Islam – Muslims. The statement below illustrates his statement:

“Paul, Islam isn’t a race, it is a cult religion. I still maintain it is the biggest single threat to world peace…..they (one can only assume the followers of Islam – Muslims), are an absolute bunch of nut pots…..just my personal opinion.“

A further comment by Cllr Clark highlights ISIS but then goes onto state that “Islam is the biggest threat to world peace.“

Judging by these documented comments, the response from Cllr Clark simply does not wash. His statements are clear and he could have contextualised them which he did not do.

The question still stands for Cllr Clark. Can he truly represent people who happen to be Muslim in his ward given his views about their faith and could it be said – about them? If his answer is yes, the next question would be, will a local resident who happens to be Muslim feel comfortable being represented by a local councillor with these views? 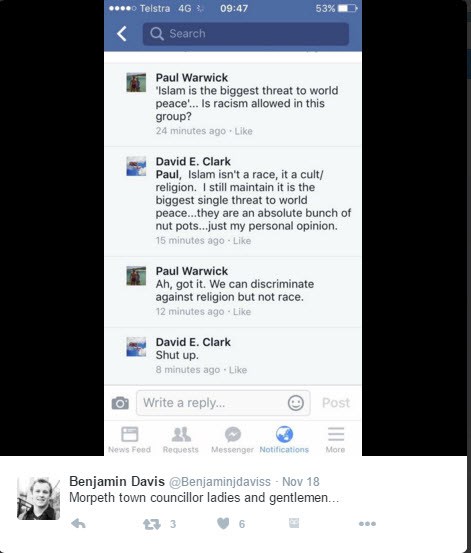