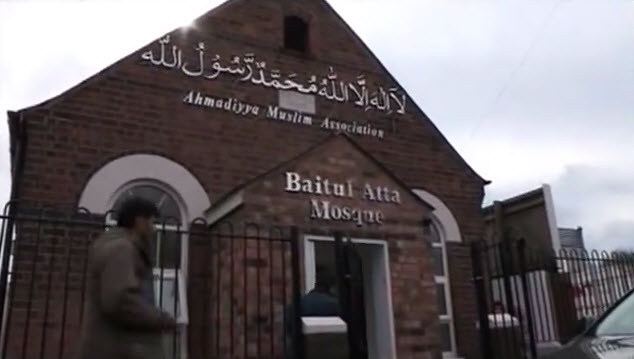 e have been informed of an attack on the Baitul Atta mosque in Wolverhampton on the 21st of June 2015. The incident took place at 4:15 am and CCTV pictures in the mosque picked up an Asian male throwing a brick through the window of this mosque.This incident comes on the back of the Shia mosque graffiti in Bradford.

The CCTV footage has been passed onto the police and the criminal damage is being looked into. The Baitul Atta mosque was opened in 2012 and was refurbished by the British Muslim Ahmaddiya community as a place of learning and worship. The motto for the community is, ‘Love for All, Hatred for None.’

The Ahmaddiya community has come in for abuse and attacks before and suffer anti-Muslim hate and intra-Muslim hate. It is not just groups like ISIS that promote and target this peaceful community, small sections of Muslim communities in the UK have previously openly espoused hatred to this group and regard them as ‘heretics.’ In Pakistan, there is systemic prejudice against this community which is enshrined within laws brought in by General Zia Ul Haq. Zia was in many instances, was free to bring in laws that he wanted since he was seen as a useful ally to the Americans in the war against the Soviets in Afghanistan at that time.

We within TELL MAMA will be willing to support a prosecution attempt and provide any community impact statements for the relevant police force. Sectarian and intra-Muslim violence has no part to play in our country or our societies and the wilful targeting of this peaceful and law abiding community is unacceptable. There are simply no ‘ifs’ and ‘buts.’ Where we have anti-Muslim or intra-Muslim hate reported to us, we will act.