As the EDL Plan to March in Bradford, We Provide Testimony About Their Hatred

Letters have been sent by West Yorkshire Police to mosques and community centres highlighting the march of the far right extremist group, the English Defence League, in Bradford on Saturday the 14th of November 2015. As the extremist group plan to march in West Yorkshire, we highlight the impacts of their sympathisers and their activists on members of the public who happen to be Muslim. Remember, such groups couch their hatred by suggesting that they are marching against ‘Muslim extremists’, though their actions show a different picture with Muslims going about their everyday business, targeted, vilified and abused.

This is the story of Khadija. Whilst we have altered her name and identifying details, the rest of her testimony to Tell MAMA is outlined below. This is the real impact of the activities of these extremist groups who are a burden and nuisance to all of our communities and to the safety of our country.

Khadija is in her 30’s and does not wear the Hijab (a religious headscarf), the Niqab (a face veil) or the Abaya (the body covering which is usually in black).

Khadija was verbally and physically assaulted in April 2015 by individuals sympathetic to the English Defence League and who were carrying EDL flags and identifying material. The perpetrators were white males.

Khadija was at an arcade at a seaside resort and she was with her children and her husband. They had come out for a family day and wanting to smoke, she exited the arcade and noticed that there were men and women holding flags which she could not initially make out, though they were chanting in support of the English Defence League.

Individuals in the EDL demonstration noticed Khadija as she stood by the entrance to the arcade and in a few seconds, she had a group of males around her saying, “we will burn your f****** Qur’an” and “we will pi** on Mohammed”. Scared and shaken she started to move away though at some point as she walked backwards, she felt that she was punched given the sudden pain she felt in her head. In a daze, she glanced and caught site of a female joining in on the assault and at some point, a male pulled off the female perpetrator and in doing so, said the following to Khadija; “you know why the lady was hitting you, because she got raped by a Paki, that’s why”. Completing the sentence, the male perpetrator spat in the face of Khadija.

Khadija eventually was taken to a police station where she made a statement. The actions of the English Defence League’s sympathisers show the brutal reality of its sympathisers who peddle nothing but hate and who use demonstrations in order to target citizens. They continue to be a menace to all of us and our collective safety and security.

This incident also shows how the EDL target anyone who is non-white. They could not have known that Khadija was Muslim – she wore no clothes that were attributable to being a Muslim. They picked on her simply because she was Asian and the attack also was anti-Muslim in nature.

So, next time you hear an EDL sympathiser saying that the EDL are not racist, take a few deep breaths and notice the pig flying behind them. No doubt, they will be telling porkies! 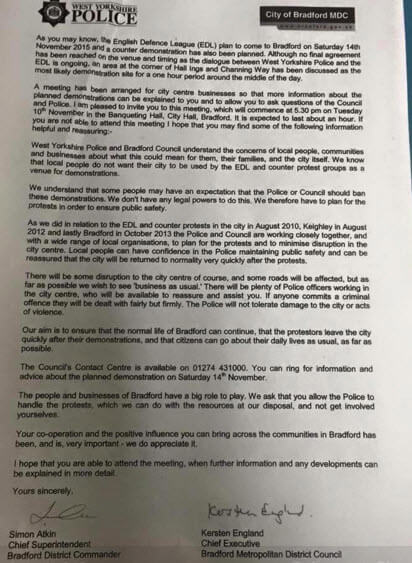 The post As the EDL Plan to March in Bradford, We Provide Testimony About Their Hatred appeared first on TELL MAMA.