Behaviour That Tramples on the Dignity of Our Nation 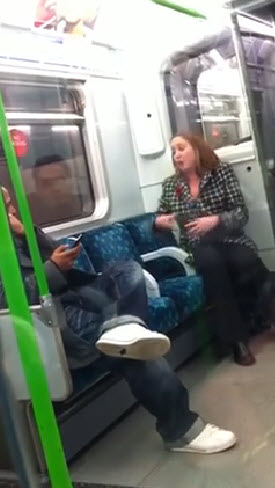 This video has come to light of a young woman abusing an Asian man who was seated next to her. The female loses her composure and is seen to abuse the Asian male and tell him to ‘go back to your country.’ After numerous hate filled statements she goes onto suggests that individuals like him, ‘want to take over the country‘ – a classic bigoted trope thrown at perceived ‘foreigners.’

The anger and resentment at the Asian man spills over as the young female comes close to him in the video and her rants continue on and on with a member of the public filming the incident.  The incident shows a side to some people that lets down our nation and the dignity of it. It is an image that many will see on-line beyond our shores and they will no doubt, build up impressions that are not reflective of the majority of people in our country. It is an appalling example of why we must continue to tackle prejudice and especially when it rears its head like this.

This video has gone viral with nearly over 1 million hits. Let us hope that the perpetrator realises that she has not only let herself down, but that she has also let down the image of our country. In no way do her comments or her actions reflect the wider majority of people in our country.

The post Behaviour That Tramples on the Dignity of Our Nation appeared first on TELL MAMA.