David Jones (@DavidJo52951945), has over 23,000 Twitter followers and regards himself as a UKIP supporter. A regular tweeter, he has built up a following on the back of his anti-migration and anti-EU tweets. The description on his avatar on Twitter says:

“UK government have abandoned Brits. We need to exit EU, ECHR, stop all immigration + look after British people. Like UKIP. All my views. I follow back – Southampton/ Isle of Wight.”

Not to be outdone on statements after the fire that overtook the Morden mosque over the weekend, Jones went onto state the following: 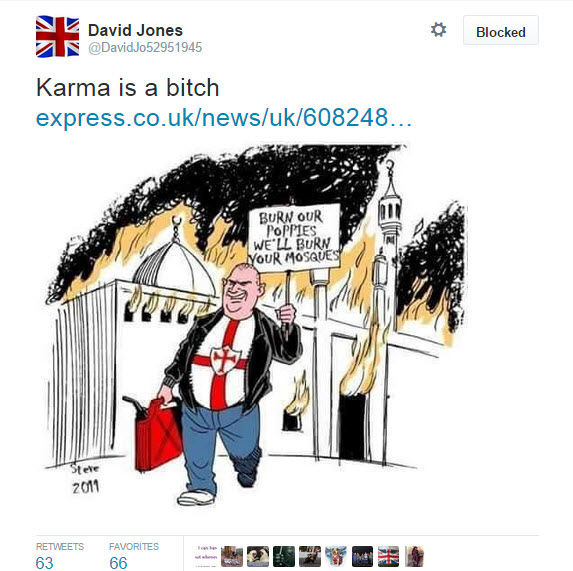 What Jones showed was his ignorance about the mosque that had suffered the fire. It was an Ahmaddiya mosque and the community has been vocal in raising funds for charities and also recently ran a ‘Poppy campaign‘ in order to raise money for charity by openly selling poppies. This was also highlighted to him as shown above and his response was even more bizarre and telling of his views.

Not to be outdone on the richter scale of ignorance his further tweet shows a level of disdain for Muslims in the United Kingdom. His response was, “I am talking about Rotherham where 2000 underage girls were abused by muslim (sic), UK is better off without Islam and muslims.”