We were notified last week of a Facebook page to the self-confessed killer of Asad Shah, Tanveer Qadiri. The Facebook page, which has 1,621 ‘Likes’ on it, (as of the 10th of July), glorifies and attracts sympathisers who glorify the killer of Asad Shah who was brutally attacked outside his shop in Glasgow. The attack was so frenzied that the killer carried on assaulting the body of Asad Shah, after it was clear that he was seriously wounded in the knife attack.

We are deeply concerned that this Facebook page has not been removed by the social media company and we have also reported it in today. It may well be that a report has not been made on this page before and we would urge members of the public to report it in. It is simply unacceptable.

The pro-Tanveer Qadiri Facebook page also has a number of chilling pictures and rhetoric on it which come across as threatening against the Ahmaddiya movement. For example, the following picture on the Facebook page states:

The statement also has a red cross marking out the face of the Caliph of the global Ahmaddiya community who is pictured in the graphic and comes across as suggesting that his personal safety may be in danger. 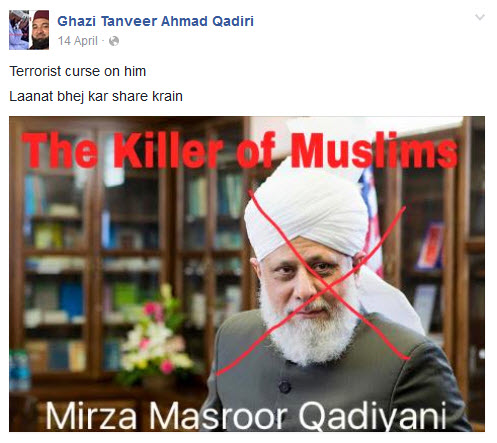 Also highlighted on the horrendous Facebook page is abuse against the father of the murdered Asad Shah. Not only does the Facebook praise his killer, it also abuses Asad Shah’s father, whom a recent Newsnight report by Secunder Karmani highlighted as having come to Scotland to flee from persecution in Pakistan. The graphic below also seems to indicate that the material may have come from the KhatmeNubowwat (KN) group which has taken a stridently anti-Ahmaddiya approach and with speakers at their events regularly using derogatory terms against the Ahmaddiya community.

Given that the Facebook page praises someone who killed another citizen in broad daylight because of religious differences, the comments and graphics are simply chilling. We, collectively, as citizens of our country must not allow such glorification of the actions of a killer to be justified. We would therefore urge members of the public to report this page in and the link can be found here.