‘Grom Legion’ – Military Enthusiasts With Views and Links That are Concerning

We have previously highlighted the group Ogniwo, and their links to far right activities. Associated with Ogniwo at certain events has been a military enthusiast group called the ‘Grom Legion’.

We have received the following information about this group which has a penchant for military weaponry.

Here is a picture from their Facebook page dated early 2016. It shows a picture of a man in military regalia suggesting this is how they deal with the ‘Islamisation of Europe’.

Additionally, here are Grom Legion individuals meeting with well know far right extremist, Marian Kowalski. We have highlighted his activities and statements before and the posting was also made on their ‘official’ Facebook page.

We were also notified of members of Grom Legion wearing Ogniwo tops. For those who are not aware of Ogniwo, here is information that we posted previously on the group. They are active in the United Kingdom and are of particular concern, given their activities that we have highlighted before.

We are also aware of the fact that Grom shared Ogniwo’s Facebook post, inviting people to the infamous “Independence Day” march in Poland. The invitation below states, “Europe Rises Against Islamization” and both Grom and Ogniwo posted it with the slogan, ‘Tomorrow belongs to us’. The slogan ‘Tomorrow belongs to us’ has been co-opted by extremist far right groups. 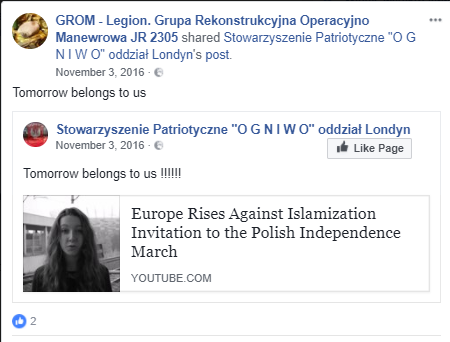 Lastly, we are aware of the fact that some members of the British police service have posed with individuals from Grom Legion who host stands at community events and who pose in military regalia. Here is an example of this. We therefore urge police forces and those in statutory authorities to reflect carefully on such engagement and to conduct due diligence activities before engaging with groups. 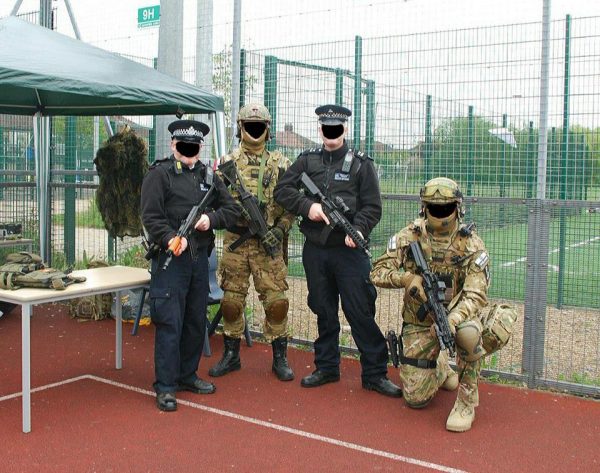