This leaflet was circulated today on social media by an anti-fascist campaigner who suggested that these leaflets are being circulated in the North Shields area of Newcastle.

The text reads – “Muslim paedophile gangs operate in this area. Are your children safe.”

This abhorrent leaflet is meant to stir up hatred and intimidate communities, whilst trying to drive a wedge between communities. This leaflet shows the nature of the vile English Defence League which seems to push against legal boundaries with no care about communities and the cohesion or future stability of our country. A parent who received that leaflet would no doubt be alarmed and worried and the last thing any parent should do is to contact this vile group.

We have seen how CSE (Child Sexual Exploitation) is used by extremist far right groups to whip up tensions and hatred. We have previously highlighted this in posts (see below) where far right groups use the revulsion that we all feel and attempt to tap into it and manipulate it in order to gain support for their vile extremist set-ups. 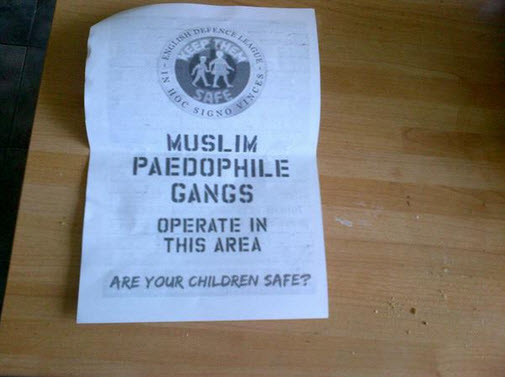 This was a previous posting from another far right extremist group – Liberty GB. Once again, the Rotherham grooming scandal is used though what is interesting are the anti-establishment and anti-police messages. They characterise the extremist far mentality of fear of existing Government structures, yet they promote the twisted narrative that they have solutions to tackle CSE. They simply do not. All they do is to try to light the fire of conflict.