Concerns about the views of the leadership of a Polish community group has intensified after Husaria Manchester has procured the lease for a community centre inside of a former church in the Manchester area.

Karol Kamil Peruta, who appears as Husaria’s main contact on YouTube, following its founding in 2017, has posted a litany of anti-Muslim content on social media and follows several far-right Polish groups and individuals on his personal Twitter.

He appeared in a Facebook Live video on the official page of Husaria Manchester on February 6, stating that the group had obtained a lease to use a disused church as a community space.

In 2016, an anti-Muslim and Islamophobic meme appeared on Mr Peruta’s Twitter account, which depicted an individual in a niqab as a bearded man with explosives attached to their chest in the place of their breasts. The tweet has since been removed but remains archived.

Following the terror attacks in Manchester and London in 2017, Mr Peruta called for Islam to be ‘banned’ on his personal Facebook account.

A blog written in 2015 by Mr Peruta claimed that Muslims, “cheat and lie. They steal and break the law. They are lazy and filthy.” This is one of many examples seen by Faith Matters brought to our attention by concerned members of the Polish community. 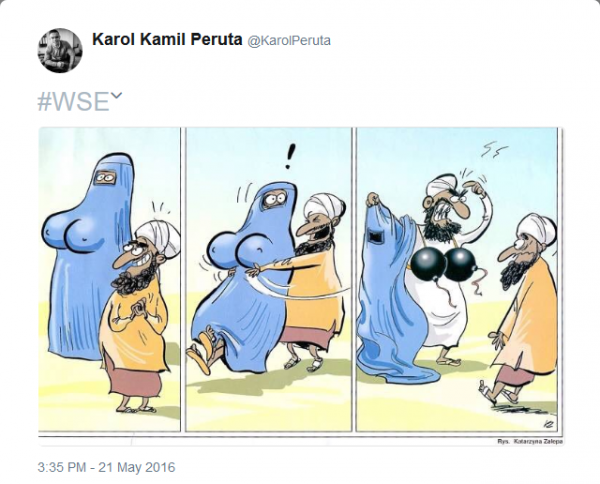 Activists in the Polish community have shared a photograph Mr Peruta took with Paul Golding, leader of the far-right street defence movement Britain First. An interview with Mr Golding, recorded in 2017, also appears on the Twitter feed of Peruta.

Mr Peruta has ranted against interracial relationships in the Polish community, adding that such relationships were turning ‘traditional’ Polish shops into ‘pseudo’ stores which stock halal products, where the store’s profits could be going towards the funding of a mosque, an Islamic centre, or terrorism. He went on to lament the ‘stupidity’ of Poles who welcome their ‘own destruction’ by working with Muslims. Peruta ended his hateful rant by suggesting that he will upload photos of such ‘pseudo’ Polish stores in what amounts to a boycott, in pursuit of ‘authentic’ Polish stores in Manchester. The attached image claimed that Polish barcodes begin with the digits 590. The post, which appeared on his Facebook on September 30, 2015, gained almost 100 shares. 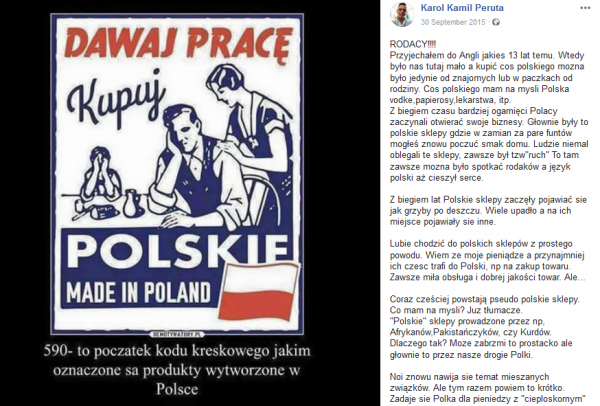 In Peruta’s blog entry from 2015, he states this about Muslims: “They cheat and lie. They steal and break the law. They are lazy and filthy”. There are many other examples of such dehumanising rhetoric used by Mr Peruta which have been sent to us by concerned members of the Polish community.

He follows the Twitter account of the disgraced former priest Jacek Międlar – a far-right extremist banned from entering the UK due to his antisemitic views. 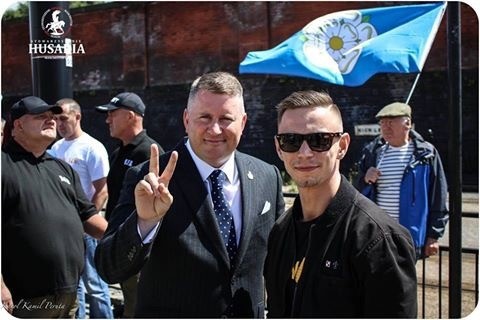 A photograph later removed from Mr Peruta’s personal Facebook page showed individuals with ONR flags at an event in 2017 (see below).

A year earlier, on June 19, 2016, near Rochdale, Karol Peruta was photographed with the controversial revisionist historian with links to the ONR, Leszek Żebrowski, who was labelled an antisemite in a 2016 article published by Gazeta Wyborcza. 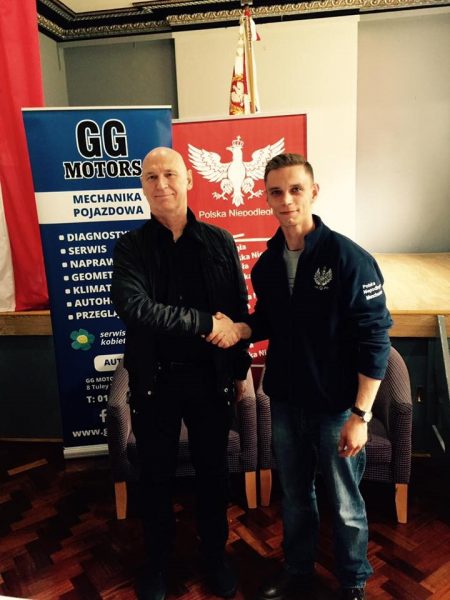 It was around this time in 2016 that Mr Peruta shared a meme on Facebook which referred to ‘Good Night Left Side’ – a neo-Nazi parody of the anti-fascist idea of ‘Goodnight White Pride’.

Nor is this the only example of this rhetoric appearing on his social media. A Facebook ‘like’ which appears on his profile is the neo-Nazi page ‘Anti-Antifa Hooligans’ which includes videos of individuals carrying out acts of graffiti and men performing Nazi salutes. Another nationalist meme was anti-Muslim and anti-LGBT in nature. Now, there’s no evidence of Karol Peruta interacting with the page, or liking any of the content, but the page itself boats almost 20,000 fans and draws in support of ultranationalists from across Europe. Why Mr Peruta liked such a page is, therefore, concerning.

An individual assisting Husaria Manchester with grave cleaning in the Birmingham area was photographed wearing a ‘Good Night Left Side’ t-shirt on April 18, 2018.

The official page of Husaria Manchester has been used to promote the neo-Nazi group Ogniwo (The Link).

Mr Peruta gave the Israeli Embassy in Poland a one-star review on Facebook, describing them as ‘liars’, days after official commemorations for Holocaust Memorial Day took place on January 27. 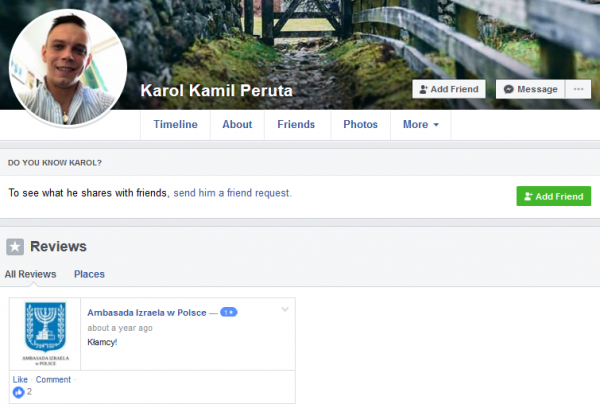 Given that Husaria Manchester has worked with mainstream Polish organisations, we are concerned that many are unaware of the views expressed on the social media accounts of Koral Peruta.

Husaria Manchester has worked with other mainstream Polish groups – from community outreach to the cleaning of gravestones, with children, and other communities. Organisations like the Kresy Family and the Polish Expats Association will abhor and reject the views expressed by Karol Peruta, and our research will be forwarded to them, to ensure such examples of entryism is not allowed to continue.

Faith Matters will be handing its evidence to Manchester County Council.