We received correspondence from the Middle East Eye (MEE) web-site which was not only bizarre, it promoted a conspiratorial line of questioning where the journalist explicitly made a link between Government support to counter extremism and promote shared values through the Building Stronger Britain Together (BSBT) programme and how “the government is using public funds to support political attacks on the leader of the opposition”. This is what the journalist, (Simon Hooper), wrote in his e-mail – that there was a covert plan by Government to attack the leader of the opposition. It was suggested by him that Faith Matters and Muslims Against Antisemitism (MAAS) were involved in this conspiracy theory.

Given the nature of his questions, we wanted to stipulate the following publicly, (unlike groups like Middle East Eye who have repeatedly deflected questions on where their funding comes from).

Faith Matters has received no funding from the Prevent programme, unlike other groups who have been heavily funded and who continue to deny that funding whilst working with Muslim communities. At the very least these organisations should be open about it, as it tackles risk to our communities and country. We have received no social media training via the Home Office, unlike other organisations and we are proud to have developed Muslims Against Antisemitism, which receives no Government funding. Furthermore, we have received no assistance in counter-messaging from the Home Office.

Hooper’s theory that the Government is funding an anti-Corbyn campaign is not only perverse, it brings into question how such a twisted conspiracy could have been formulated.

Faith Matters has responded to the allegation and line of questioning in the below manner (in bold), which Middle East Eye journalist, Simon Hooper, purposefully claims he is not going to cite in his e-mail to us. It was the explicit comment below that he was instructed to use as our response and which he says he is not going to. So, the question we ask, is why not? Why is the Middle East Eye not willing to be transparent about its own funding or which state that money emanates from?

The response we gave him was:

“Given the irony that it is MEE who are apparently the beneficiary of political or State funding, it would be wholly inappropriate for us to provide any response to your unfounded and potentially defamatory assertions.”

Instead, by-passing our explicit statement, Hooper said that he would use a statement that was marked as private and confidential by our solicitor. Breaking a trust, (hardly good practice from from a journalist), he stated in an e-mail that he would use the following comment from our defamation and libel solicitor:

“Faith Matters received (BSBT support) from the Home Office and acts without fear or favour in its criticisms of anyone including politicians or political parties whose words or actions risk stirring up anti-religious hatred. It does so, and will continue to do so, from wherever such words or actions emanate”.

The BSBT programme is separate to the counter-terrorism strategy and was developed to build resilient communities against all forms of extremism. We utilized that funding to counter far right and online extremism and promote civil society and democratic engagement to young people, hardly any secretive ploy to attack Jeremy Corbyn.

Given that a number of our staff have been subjected to repeated and long-term threats, intimidation and abuse, we made a decision not to highlight this support publicly, but did do so to partner organisations and those working within the anti-extremism (far right) activities, so that they were aware. This is perfectly reasonable given the long term threats to colleagues and to our organisation, including threats to mob our offices by anti-Muslim activists.

Faith Matters has been and will continue to be critical of the poor way in which antisemitism has been tackled within the Labour Party and the way that Jeremy Corbyn has linked up with groups who have a very poor track record of relationships with communal Jewish organisations. Correspondingly, we have consistently been critical of the Conservative Party and their lack of transparency and action around stamping out anti-Muslim bigotry within parts of their membership base. Notably, Middle East Eye have missed this element out and focused on the former.

It is also interesting to note what respected BBC journalist Daniel Sandford said of the Middle East Eye in August 2019:

“The story about the Home Office secretly funding the “This is woke” social media brand was brought to us by Middle East Eye, whose funder is unknown. Sigh. They are all at it.”

“Basically what you do is run a “news” or “issues” web-site or brand. Put all kinds of content interesting to your target audience on it, and then slip in hidden messages or a deliberate editorial slant.”

Sandford clearly understood MEE is about. 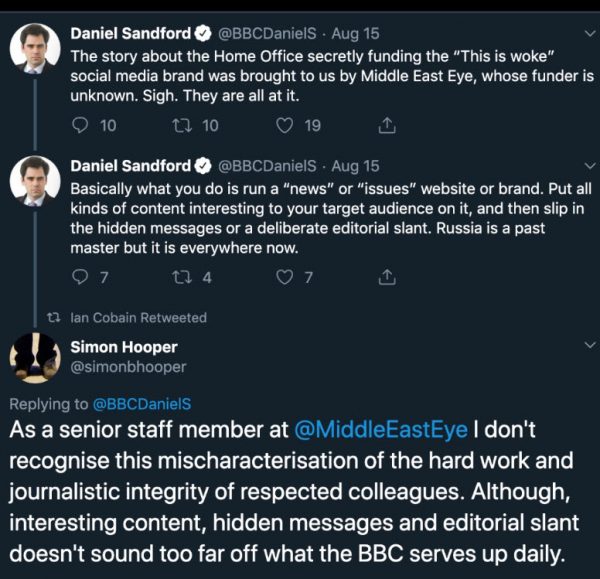 Little information can be found on the funding sources of Middle East Eye. David Hearst, the MEE’s editor in Chief who was a former foreign correspondent for The Guardian has refused to highlight where the site’s financing comes from. He has previously stated that it comes from “individual private donors”. So much for the transparency that they try and enforce on others.

In an article for Middle East Monitor (MEMO) in February 2019, Hearst commented on the cancelling of a Parliamentary room booked for the controversial Chris Williamson MP where the film ‘WitchHunt’, sympathetic to Labour activist Jackie Walker was to be shown. Hearst stated:

“The debate about antisemitism in the Labour Party is all about Israel, and whether indeed anti-Zionism is antisemitic”.

He also went onto add:

“The problem lies with the Board of Deputies (of British Jews) which claims to speak for all Jews in Britain. These are the leaders who have appointed themselves judge, jury and hangman in each and every allegation of antisemitism”.

For Hearst to reject what was at its heart calls to tackle antisemitism in Labour, betrays any empathy or understanding for Jewish Members of Parliament like Luciana Berger, Louise Ellman or Ruth Smeeth MP.

Additionally, Hearst’s attack on a respected communal organization where Board members are elected and held accountable by members of Jewish communities, was not only uncalled for, it deflected from the abhorrent and misjudged comments by Walker who previously said:

This seems like a noble sentiment and when challenged that Holocaust Memorial Day included other genocides such as Rwanda and Srebrenica, she stated that it was not ‘advertised’ as such – which was patently untrue.

Al Jazeera (AJ) connections with Middle East Eye also should raise eyebrows as to who finances this outlet? The Director of Middle East Eye Ltd is Jamal Bassasso who was a former director of planning and human resources at Al Jazeera. It is also known that Jonathan Powell, who worked with Al Jazeera since 2009, was one of the founding members who supported the infrastructural set up of Middle East Eye. Powell worked for around 6 months to support the set up of MEE before returning to Doha to carry on his work for Al Jazeera.

Bassasso was a former director for  Samalink, which in turn was the registered agent for the website of the Hamas linked Al Quds TV. Hamas’ antisemitism is well known, and let us not forget that Hamas recently saluted Jeremy Corbyn for his support for a pro-Palestinian rally in which a speaker stated that Jewish organisations are ‘in the gutter’ and are ‘part of the problem’.

Al Jazeera and the state that funds it (Qatar), through its associations with some of the individuals mentioned above need to be highlighted. Remember this is the same state (Qatar) that gave sanctuary to one of the Muslim Brotherhood’s religious leadership, one Yusuf-Al-Qaradawi, who has been barred entry into the UK. It is precisely individuals like Qaradawi who have promoted antisemitism where he has issued fatwas authorizing attacks on all Jews. On Al-Jazeera Arabic in January 2009, he said:

“Oh God, take Your enemies, the enemies of Islam….oh God, take the treacherous Jewish aggressors….Oh God, count their numbers, slay them one by one and spare none”.

It is precisely this kind of hatred that Muslims Against Antisemitism (MAAS) was developed to challenge. Individuals like Qaradawi who were previously feted by the likes of Ken Livingstone need to be challenged and when leaders like Corbyn attend events in Doha in 2012, where in an interview with the Iranian state funded Press TV, he praised his ‘brothers’ – some of whom were speakers from questionable organisations, MAAS will challenge and hold to account such two faced leadership. At this very conference was Khaled Meshaal, Hamas’ political voice and Dr Abdul Aziz Umar who was given seven life sentences for his role in a Jerusalem suicide bombing.

So let’s be clear; Corbyn’s approach on tackling antisemitism has been abysmal and duplicitous. Until Jewish members and individuals feel that they have a home in Labour and until they feel that the leadership demonstrates tackling this hate, we will continue to critique this kind of behaviour. Attempts by sites like Middle East Eye to intimidate and bully us will not be tolerated. Muslims Against Antisemitism will continue to speak out as will Faith Matters which was founded on building better relations between Muslims and Jews; this is something that we know Corbyn has yet to enact through his actions. Instead he chooses to play off one community against the other.

Many Labour MP’s and members support our work. They have done so for many years and they continue to do so because we have challenged those who seek to divide and play off communities.

Finally, conspiracy theories suggesting that the BSBT programme is a covert mechanism to undermine Corbyn through not-for-profit organisations is not only perverse, it reeks of conspiracies that form the bedrock of parts of the hard left today. We don’t need to be critical of Corbyn or Boris Johnson for that matter because of a ‘higher’ plan. It is pretty simple; Corbyn has failed Labour and the leadership needed by many. This country needs a strong opposition. It needs a Labour Party that can hold the Executive and the Government to account, particularly at this turbulent time. For us, it is clear that Corbyn has fallen short of providing that.