Over the last 3 years we have systematically showed that the on-line world and social media present significant challenges to those working on tackling anti-Muslim hatred. The challenge is not only significant, it certainly changes fast as language and actions are affected by local, national or international incidents. 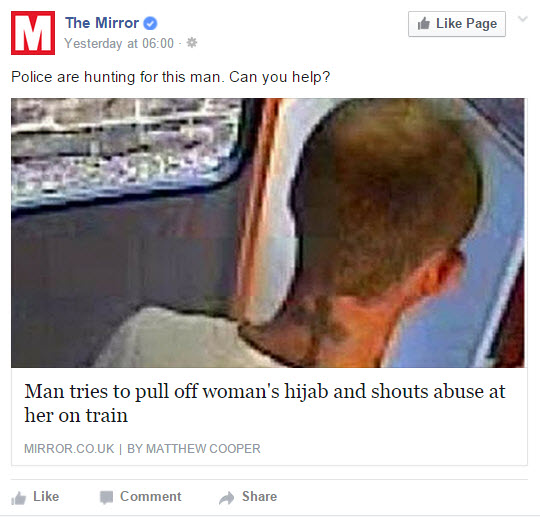 These are just some of the tens of responses that glorify the actions of the perpetrator who tried to pull of a woman’s Hijab and who shouted abuse at her on a train. In fact, once again, comments made on the Facebook page associate ‘Muslim men’ alone with grooming and perceptions after national scandals like the Rotherham grooming scandal continue to strongly affect community relations.

Lee Marshall, (who seems to like taking selfies) said:

The question here, ladies and gentlemen, is how some people, like those named here, think that the ‘problem’ is with the victim and not the perpetrator. How can individuals make such statements against the victim, just because of her visible faith and her Hijab.

If we are to truly tackle all forms of hate, then challenging anti-Muslim hate also needs consistent work, yet practitioners who do this are sometimes threatened, have malicious blogs written about them and are themselves targeted by those who seek to legitimise their hate and bigotry. Collectively, we need to stand against such people and to protect some core values that are part of our country’s heritage. These include living free from fear and ensuring that no community is targeted because of their identities. On these core values, there should be no compromise.

The post Mirror Story of Female Hijabi Attacked Draws Support by Some for the Perpetrator appeared first on TELL MAMA.