A new far-right Polish coalition is seeking to find new ways to gain a foothold here in Britain, Faith Matters can reveal.

The revelations will concern communities given that a Konfederacja motto is “We don’t want Jews, gays, abortion, taxes and the EU”.

During the recent European Elections, Konfederacja gained 24.1% amongst Poles voting in the UK, which greatly contrasts with their 4.55% of the vote in Poland.

On June 15, members of the Birmingham branch were advertising an official meeting hosted in the Polish Millennium House, which has been a cornerstone of Polish life in the city, for decades. 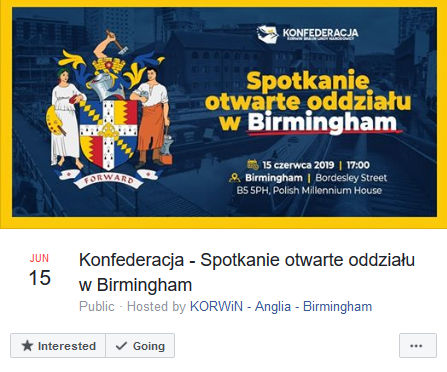 According to the Facebook event page, five people attended, but it seems that the event was not advertised on the official Facebook page of the Polish Millennium House, who may be unaware of hateful views expressed by members of Konfederacja and its leadership.

The leadership of Konfederacja in the UK, however, is linked to Jakub Grygowski – who has made several false claims about life in the UK – including that Muslims arrive to claim benefits, that Christian children are unable to wear crosses for ‘fear’ of ‘offending’ Muslims, and that LGBT+ equality exists due to years of ‘brainwashing’.

On Twitter, Grygowski has suggested that Muslims possess a predilection for bestiality. 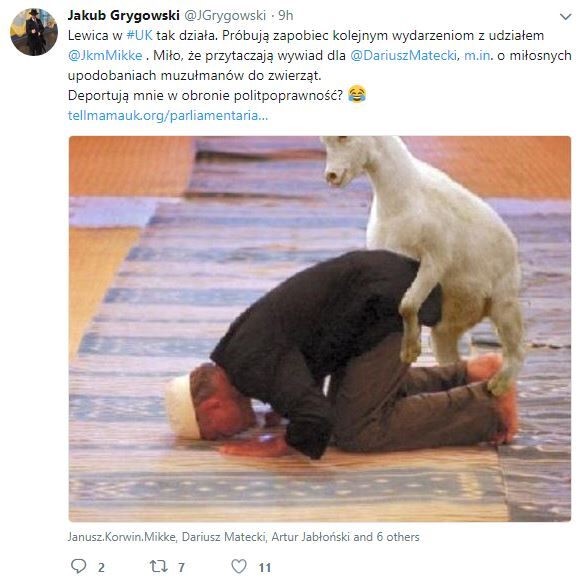 Grygowski has appeared on the radio show of the notorious antisemitic ex-priest Jacek Międlar – who remains banned from entering the UK. He’s now a regular contributor to Międlar’s own alternative far-right news website. And, like Międlar, Grygowski hosts his own radio show which has given voice to others on the Polish far-right (including the leadership of Konfederacja), under the mainstream platform of Radio Star.

His links to the Polish far-right here in the UK run deeper, however, as his former group “Liberty” co-signed a letter of cooperation with other Polish far-right groups, as revealed by Faith Matters last year.

Others members of the Konfederacja leadership include Kaja Godek, an anti-abortionist, who was banned from Twitter after calling homosexuality a form of “deviancy” and a “prelude to paedophilia”. In a shocking and hateful statement, Godek claimed that “gay people want to adopt children because they want to rape and molest them” in quotes picked up in the Polish magazine Wprost.

Grzegorz Braun has made several homophobic and antisemitic statements over the years, which includes calling for a ‘legal ban’ on homosexuality.

Perhaps the most notable name on the Konfederacja to non-Polish audiences is Janusz Korwin-Mikke, the disgraced former MEP who argued that the Holocaust-denying historian David Irving, should be allowed to enter Poland since there was no proof that Hitler knew about the Holocaust.

Faith Matters has raised concerns about Korwin-Mikke entering the UK before.

On social media, the group has been explicit in statements which invoke antisemitic canards of disproportionate Jewish influence in politics and public life, including the idea that the ruling government is being ‘influenced’ by “Jewish lobbies”.

And argued that gold held in London should be returned to Poland, as they questioned whether ‘Jewish’ claims (vis-à-vis the flag of Israel) of ownership, were still valid.

Some in the Polish community have condemned the group online for borrowing imagery from Marvel film Avengers franchise to further their ‘neo-fascist agenda’ online.

The Konfederacja also used a meme from The Lord of the Rings: The Return of the King, in a tactic similar to that of the Spanish far-right Vox party. The actor who played Aragorn in the hit films, Viggo Mortensen condemned Vox, stating: “it is even more ridiculous to use the character of Aragorn, a polyglot statesman who advocates knowledge and inclusion of the diverse races, customs and languages of Middle Earth, to legitimise an anti-immigrant, anti-feminist and Islamophobic political group.”

We hope that community groups will prevent any further attempts from members of Konfederacja to enter their facilities, and now the party views are more public, that conversations are had regarding how their version of populism is nothing more than a vehicle for hatred and bigotry.