Ogniwo – ‘The Link’ Is A Group That Should Concern Us All

Ogniwo – ‘the Link’, is an organisation that describes itself as a ‘Patriotic Association’ and is active mainly in London but also has chapters in Cambridgeshire and the South of England. Some of their members and sympathisers are known to come from football hooligan circles and can be seen on social media photographs making fascist salutes and with far-right symbolism.

One of the real concerns that we have raised previously within Faith Matters has been that language barrier has created difficulties for UK based statutory agencies in understanding the risks and threats that there are to settled communities of Polish heritage in the United Kingdom and more so, to communities who arrived in the UK after the Accession of States like Poland into the European Union.

Whilst the vast and overwhelming majority of settled communities of Polish heritage in the UK get on with their lives with a view to building themselves a better life, a small number carry with them views and ideologies that directly clash with the pluralism that we take for granted in the UK. This pluralism needs to be defended by knowing and understanding the risks that such groups pose.

An example of this clash in values can be demonstrated through social media posts associated with such groups. For example, the banner on this photo, posted on Ogniwo’s Facebook page and deleted since, states that Europe must remain white. The exact translation reads as, “Europe will either be white or uninhabited”.

Ogniwo is linked to a Polish-based right-wing historian, Tomasz Panfil, who is their honorary member and visited them in the UK on several occasions. His next visit to the UK has just been announced, he is due to speak in Stafford and Southampton on the 10th and 11th of March. Panfil is a historian from the Lublin Institute of National Remembrance.

He is known in Poland for his attempts to destigmatise far right symbolism. For example, as an ‘expert’ witness, he claimed in a Polish court during the trial of a Polish neo-Nazi charged with using banned Nazi symbols, that the Swastika can have many different meanings and is not necessarily a Nazi symbol, depending on its orientation. The perpetrator in question was subsequently released.

Panfil also claimed a symbol of Celtic cross with the words ‘White Power’ had “patriotic intentions” behind it. He also claims the German Nazi party was in fact a left-wing party and that the situation of Polish Jews under Nazi occupation “did not look very bad”.

Ogniwo is also associated with Polish neo-Nazis who were convicted of violent disorder at an anti-fascist rally in Liverpool. The leader of Ogniwo is one Mariusz Zawadski and individuals associated with Ogniwo include Lukasz Pietraszek who was recently jailed for violent disorder in Liverpool. The Judge stated the following around the violence in Liverpool, where a woman was scarred for life, a man suffered a broken nose and a police officer was knocked unconscious.

“There was nothing benign about the hooded tops that those men were wearing. It was planned mob violence.”

The leader of Ogniwo’s views are pretty easy to ascertain when this photo of him came to light on social media. The top he is wearing states:

“Death to the enemies of the fatherland”

Zawadski’s views about Muslims are also evident through these Facebook postings. Interestingly, the use of a pig in the picture moves the post into one which is anti-Muslim, even though the person on the floor seems to be symbolised as an ISIS supporter. Instead of targeting IS supporters and sympathisers, Zawadski makes clear his disdain for Muslims.

Ogniwo have also hosted Marian Kowalski, who has been extensively written about by Faith Matters in the report entitled, ‘The Changing Face of Hate in Poland: From Anti-Semitism to Anti-Muslim Hate in Poland’. Kowalski’s anti-LGBTQ and anti-Muslim comments, allied to his provocative stunts which include support for white supremacist, Janusz Walus, highlight the nature of the associations that Ogniwo keep.

Kowalski was recently meant to speak at a Polish restaurant in Ealing and failed to attend after his views were publicly highlighted.

In line with sympathies that Marian Kowalski has around Janusz Walus, Ogniwo have praised Walus and run online campaigns for him. For example, they highlight campaigns outside the South African Embassy in London where they call for the release of the white supremacist.

Worryingly, the group recently was the co-organiser of a training session in the use of firearms and military tactics in September 2017. The instructor, an ex-soldier from Polish special forces, is not known to have any far right sympathies and we would like to stress that his involvement in training members of Ogniwo, should not imply that he believes in far right ideology or groups. The firearms training session was marketed mainly in far-right circles.

These are some of the photographs that were passed to us around the military training. 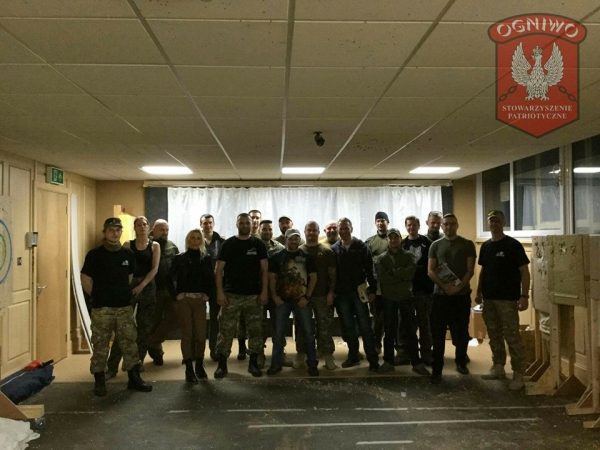 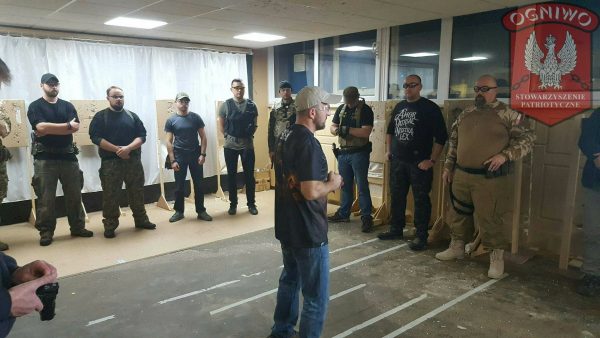 A follow up training session with the same instructor is due to take place in Evesham, West Midlands on the 9th-11th of March. ‘Ogniwo’ is not listed as an organiser this time but the organiser, a group of military enthusiasts calling themselves ‘Grom Legion JR 2305’ lists ‘Ogniwo’ as their “partners” on their website.