You simply cannot make this up. Self-publicist and ‘live by Twitter’ Karen Danczuk decided to comment on the deaths of over 700 Muslim pilgrims in Mecca. The pilgrims were crushed as they carried out the sacred ceremony of the Hajj pilgrimage in the ancient city of Mecca.

Instead of sending condolences, Danczuk decided to state the following:

“Many Muslims believe Allah shows his feelings by actions. I wonder what message they think he’s sending following both tragedies at Mecca.” She signed the tweet off as KD.

Without over-analysing the comments, all faiths in some shape or form, believe that God (or gods) show their displeasure or pleasure with mankind through physical actions and manifestations and clearly Danczuk has never read Greek or Roman philosophy or history. Maybe, just maybe, she has heard of the Oracle of Apollo at Delphi who visioned the actions of the Gods through physical manifestations? We think not.

However, the statement is suggestive and could suggest to individuals reading it, that Allah is unhappy with Muslims, hence he strikes them dead. That to a lay reader, could well be its ordinary meaning. As we suggested before, instead of sending condolences, this is the best she comes up with. 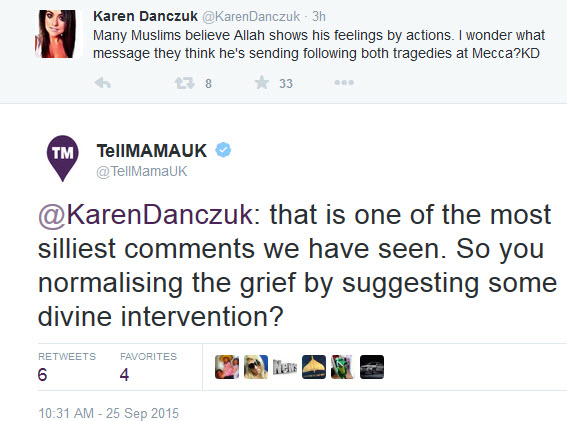 The response back from her is even more interesting. She states:

“Yours is a silly comment. So am I wrong? Muslims don’t believe Allah will make his feelings known? KD“

Again what is interesting is that Danczuk lumps all Muslims together. It is as if she thinks that there is some supernatural group-think going on, as if Muslims are all programmed to think the same and believe the same thing. Which leads us to the following – does Danczuk really know much about the dynamics in Muslim communities? We think not, once again.

Finally, we would suggest this. If Danczuk truly wants to get involved in discussions, it might, just might be useful to understand something about the subject when commenting on the deaths of individuals. Something to think about Karen? 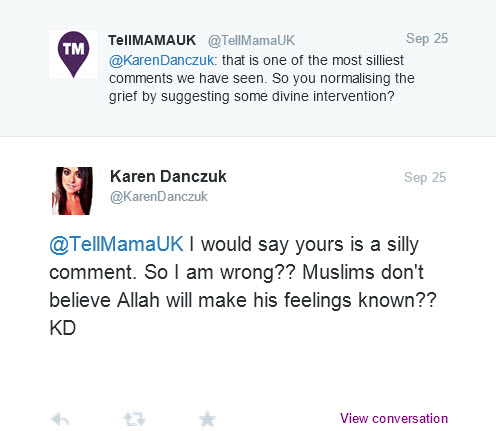