Role of Righteous Muslims in the Holocaust

Faith Matters developed the Role of Righteous Muslims Booklet in order to document the stories of Muslims, driven by their faith and the code of honour (BESA), to protect the lives of persecuted Jews in the Holocaust. The code of honour or BESA was fundamental to Albania and many Albanian Muslims protected fellow Jewish Albanians from persecution because of this code and because of the heightened value of life which was fundamental to Quranic teachings. From Morocco through to Paris and Turkey, many Muslims stood up and protected the lives of the persecuted through the Holocaust.Many of them were persecuted Jews.

The story of Muslims in the Holocaust is deliberately and micheviously being re-written post 9/11 as though Muslims supported the efforts of the Nazis. The vast and overwhelming majority of Muslims supported the war efforts against the Nazis and fought for the liberation of France, for England and King and Country and in the battlefields of Burma, South East Asia and Italy. There were those in the minority who misguidedly supported the Nazis who won their support by manipulating local tensions and issues. The Bosnian brigades are an example of this and these elements cannot be written out, nor should they be. Localised tensions and ethnic divides were used to manipulate groups to join the Nazi effort and 60 years later, many Bosnian Muslims were they themselves persecuted and killed in a genocide by Serbs who created death camps and who used rape as a weapon of war against many Bosnian women.

We also take this opportunity to honour those, regarded as ‘Righteous’ by Yad Vashem, who were Muslim and who have been honoured for risking their lives and the lives of their families in protecting the lives of persecuted Jews. These are their names. May their names and the names of others live on in history and be a source of pride for Muslims and people who believe in the value of life. 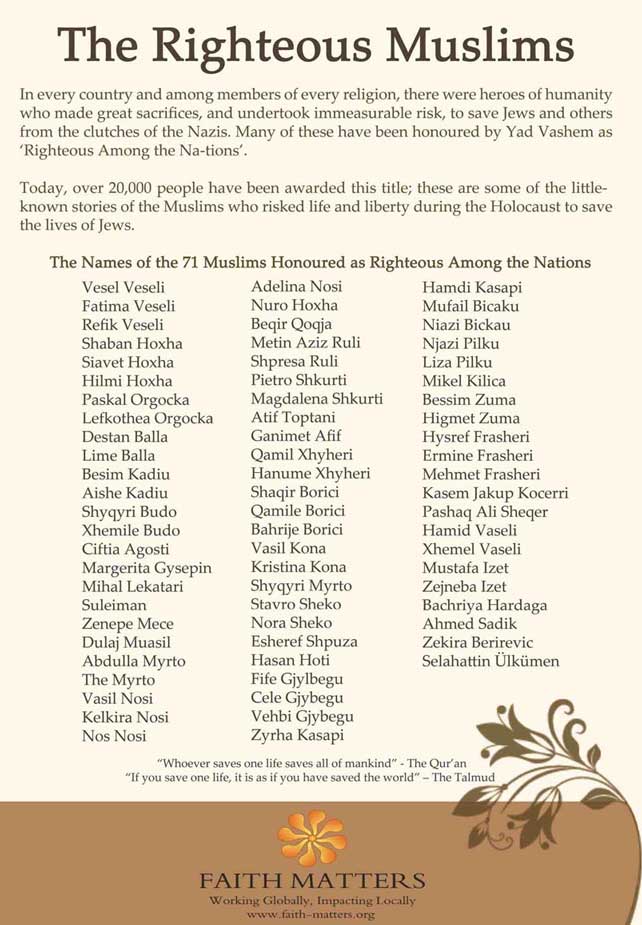