Roman Kneblewski – An Ultra-Nationalist, Anti-Migrant and anti-LGBT Activist in Finchley

The Polish Catholic Parish in Finchley has just announced on it’s website that this year it’s Lent Retreat – (17 to 20 March) – will be led by Roman Kneblewski, a radical priest from Poland known for his ultra-nationalist, anti-immigrant and anti-LGBT messages: 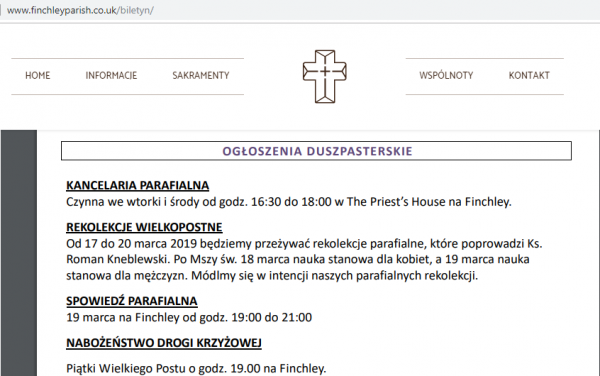 He is on record as saying:

“I wouldn’t condemn Fascism. If by Fascism we mean Francoism for example, which saved Catholic Spain from communist criminals, then I’m all for it.”

He also expressed full support for Jacek Międlar, an extremist former priest who is banned from entering the U.K. Kneblewski stated that Międlar’s anti-Semitic and hateful rhetoric is in fact a “language of love”. He also called Międlar “a good Catholic and a good Pole”.

In a sermon, Kneblewski repeatedly called refugees heading for Europe an “invasion of Islamists”, adding that should they come to Poland, they would “slit throats, rape women and force children to become Muslims”.

In the same sermon he stated:

“Those invaders come here and they want benefits which they see as a tribute owed to them by us, infidel dogs” and: “Whoever encourages to accept those invaders is a sinner”.

On his Facebook profile, he wrote: “The Qur’an should be burned! Burn it, nothing else!”

He also approved of burying pig carcasses on mosque construction sites as a possible method of preventing mosques from being built.

Kneblewski is also known for his hostility to LGBT communities. In an online sermon he called homosexuality a “heinous perversion”.

“Some individuals shouldn’t even see a psychiatrist but a vet. And I will have to see a gastro-enterologist as I’m getting a gag reflex”.

Kneblewski also hosted a lecture by Paul Cameron, an American anti-LGBT pseudo-scientist, in his parish in Poland. The lecture was titled “The Myths of Homo-Propaganda”.

Considering there are thousands of Catholic priests in Poland, most of whom preach a message of love, peace and respect, one has to ask why would the Polish Parish in Finchley choose such an individual to lead their faithful during a Lent Retreat? It is a legitimate question and we will be letting the relevant authorities know.