The start of the Islamic New Year (Hijri) and the Jewish New Year (Rosh Hashanah) take place at the same time this year on the 2nd of October 2016.

The Hijri is the start of the new Islamic year and this year marks the beginning of the Hijri year 1438. It is based on lunar cycles and the count begins from 622 CE, the year of the migration of Muhammad and the first group of Muslims from Mecca to Yathrib or Medina. The event was known as the Hijra and is one of the most important times in Islamic history as the first Muslim community formed and came into being. It’s significance is therefore symbolic and spiritual and a  time of renewal and regeneration.

Rosh Hashanah is celebrated by Jewish communities across the globe and is one of the holiest days in the Jewish calendar. It occurs 163 days after the first day of Passover and is known as the ‘Head of the Year’. It is one of the holiest days for Jewish communities and is a time for families and relatives to come together and to celebrate their identity, history and a sense of belonging.

Rosh Hashanah is also regarded as the traditional anniversary as the creation of Adam and Eve, though Jews believe that it is a time of judgement when God balances a person’s good deeds over the wrongdoings that they may have conducted. Hence, it is also seen as a time of reflection.

This year, with the two events taking place at the same time, let us celebrate the wonder of all that binds us together within and externally beyond our own communities. 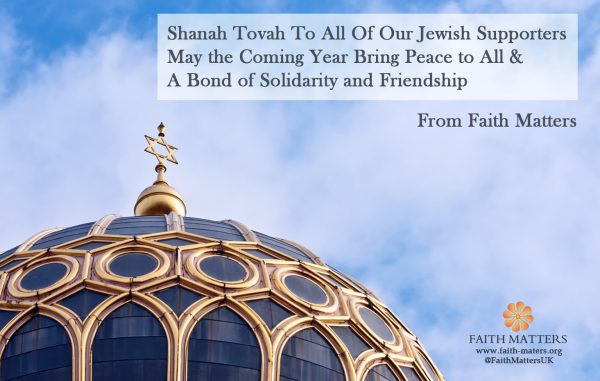