Faith Matters calls on the Home Office to stop two far-right politicians from Poland from speaking at a community event in Manchester on Sunday, May 1.

Those names include the disgraced former MEP and far-right extremist from Poland, Janusz Korwin-Mikke, and Konrad Berkowicz of the far-right Confederation bloc, which we’ve highlighted before.

We are indebted to the organisation A Million Poles for making us aware of the event next week.

Part of our updated dossier to the Home Office highlights Mikke includes recent anti-Muslim content on Twitter, including propagating outlandish conspiracies about a so-called Islamic’ takeover’.

On Twitter, Mikke has pushed disinformation and propaganda about the illegal Russian invasion of Ukraine, as the ICC agrees to investigate war crimes.

Mikke supported the far-right media personality Eric Zemmour in the French election – LGBT+ groups are suing Zemmour for Holocaust revisionism over his denial about the deportation of gay men by the Nazi machine of tyranny.

When informed on Twitter that the falangist fascist dictator of Spain, Franciso Franco was “Jewish”, Mikke scoffed, stating that he “smashed” communism, before adding, “But you have to fight the JEWISH COMMUNE, because it is an intelligent, very dangerous enemy!”. The account Mikke quoted with this reply posts highly inflammatory and racists statements like, “Being jew/muslim is far worse for me than racemixing.”

Mikke’s use of Twitter has, over the years, targeted the Swedish furniture giant in July 2019, calling for the boycott of these “homo-fascists” in Poland. Much has also been written about their political aspirations to curtail LGBT+ rights in Poland.

It’s easy to find other examples of racist speech on Mikke’s Twitter – including a grotesque antisemitic meme captioned with the N-word. 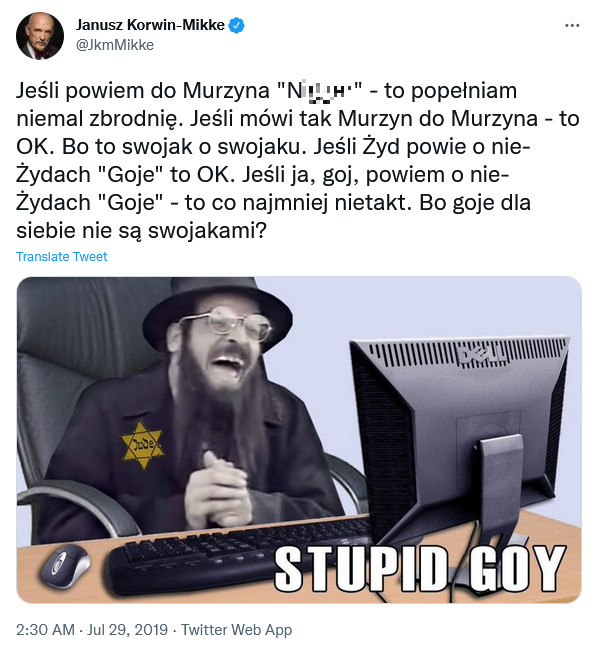 Mikke has called for lowering the age of consent for children as, “There are girls who are 12, 13, and completely mature.”

In 2019, Berkowicz put a kippah (skullcap) on the head of a rival lawmaker Anna Krupk, during a debate on restitution for Jewish Holocaust victims, the Times of Israel reported.

On Facebook in 2019, Berkowicz claimed that LGBT communities have “disturbed urges”. In 2016, Berkowicz shared an anti-Muslim meme linking refugees to ISIS as a “trojan horse” to enter Europe.

In 2020, the JPost reported that Mikke said on Polish television that “Murderous pogroms against Jews in Europe had a positive outcome because the weak in the Jewish community died and the strong survived”, which he used to claim that Covid-19 was ‘eradicating’ the weak and ‘improving’ the human gene pool.

Years earlier, Mikke made a Nazi salute in the EU Parliament in 2015 and 2014, claiming that the fascist dictator Mussolini was merely “trying to protect Jews” and that Hitler’ knew nothing’ about the Holocaust in a 2014 article where he expressed abhorrent views on rape.

The Polish anti-racism organisation Never Again told Faith Matters, “”The ‘NEVER AGAIN’ Association is dismayed by the planned meeting of the Polish far-right leaders in Manchester. We are seriously concerned they are going to promote their hatred and bigotry among the Polish community in the UK. This meeting has to be prevented and the preachers of hate must not be allowed to sow division and strife.”